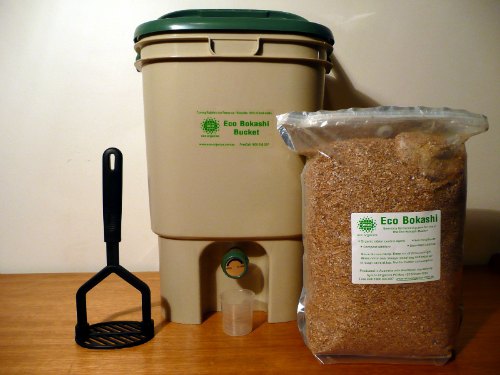 From Bokashicomposting.com we have the following description; “Bokashi composting is a safe, convenient, and quick way to compost food waste in your kitchen, garage, or apartment.”

To get started you need a special bokashi bucket that has a tight lid, and a spigot at the bottom to drain off liquids (pictured above). These will run you $60 to $150, or you can make a DIY for $20. You also need the ‘special sauce’! It would not be a very good process if there was no special sauce to sell you. It is normally referred to as bokashi bran or Effective Microbes.

The process is fairly simple. Put your food scraps in the pail and sprinkle some bokashi bran on top. Squish it down tight to get the air out. Close the lid. Each time you have more scraps, add them to the pail, add bran, and squish.

After a few days, liquid starts to form in the bottom of the pail. This needs to be drained or it will start to stink. This liquid, the  ‘bokashi tea’ can be used to fertilize your house plants or your garden plants.

After a few weeks, when the pail is full, you take the contents outside, and either dig it into your garden, or add it to your compost pile.

That is the basic process. If you want more details or have specific questions about the process there is lots of info on the net.

I found the following benefits listed at various sites on the net.

This sounds like a good system, and any system that returns kitchen scraps to the soil is a good thing. So in general, I have no problem with bokashi composting. If it gets you composting—great.

But….. there is always a but. Is this really a method of composting? Is this system better than the more traditional methods of composting? These are the important questions and the ones I will look at in the rest of this post.

If you read the above quickly, you might have missed the statement which says “After a few weeks, when the pail is full, you take the contents outside, and either dig it into your garden, or add it to your compost pile”. Does this make sense? Why would you add fully composted material back to the compost pile?

If you read the fine print you soon understand that bokashi composting is not a composting process at all. Bokashi in Japanese means to ferment. This process is actually a fermentation process. What you are doing is turning your kitchen scraps into pickled kitchen scraps. At the end of the process the food looks just like it did when it went into the system, except it’s pickled. An orange looks like an orange, and an apple looks like an apple.

There is no composting taking place in bokashi composting—talk about false advertising!

Knowing this fact makes the earlier statement make more sense. Once you have fermented your scraps, you then need to compost them. You can do this by adding them to a compost pile or you can just dig them into your garden soil where they will compost naturally.

This system is especially promoted for apartment owners—what do they do with it after fermentation? Throw it in the garbage? They could have done that before fermenting.

Now that you understand the process it is also clear why it is so fast—only 2 weeks. It is fast because there is no composting, which is a slow process.

The benefits listed above as #2 to #6, inclusive, are really not benefits when we compare the two methods. I make compost in bins and don’t worry about greens and browns—I just add whatever I have. It is outside so smell does not bother me, and if a mouse comes by for a bite to eat, so what! Nutrients can be lost if it rains too much, but they are lost to the soil below the compost pile—they are not really lost since the tree roots under the compost pile use the nutrients. If I really care about nutrient loss I can cover the compost pile to keep out the rain.

Traditional composting, if higher temperatures are reached, can even compost meat and cheese.

The difference in the two systems is the pickling process. The apparent benefits of pickling are the Effective Microbes added to soil and the bokashi tea.

For more information on traditional composting see Compost – What is Compost?  and Benefits of Composting.

For a detailed comparison of Bokashi and traditional composting see: Bokashi vs Composting.

Dr. Higa, the person who originally developed the bokashi system, also developed a special sauce which he called ‘Effective Microbes’ (EM). All kinds of special properties have been assigned to this mixture, but nowadays lots of people sell the microbes already added to the bran. Everyone in the industry now has their own ‘secret sauce’ ie Effective Microbes + bran.

Adding the microbes is important since they control the fermentation process. For example, in wine making, special starter yeast mixtures may be added to start the process. The reason for doing this is that you want the right kind of microbes to grow quickly and out compete the ones that will create a lot of bad odors.

There are also claims that the EM are good for the garden. That is not likely to be true. In the bokashi system it is important to keep oxygen out. The EM are microbes that grow best in anaerobic conditions ie no oxygen. If too much oxygen gets into the system, the EM die, and aerobic bacteria take over and fermentation is slowed or stopped.

Reference 2 below tested EM tea on field grown crops and found that they did not increase yield. Similar field studies have has the same results. Effective microbes are important to make the bokashi system work, but they don’t really add any benefit to your garden.Nutritious Bokashi TeaAs fermentation progresses, excess liquid drains into the bottom of the pail, and you need to remove it. It is claimed that this tea is a great source of nutrients for your plants.How nutritious is it? If it contained a lot of nitrogen, phosphorus and potassium, you would expect that the companies selling these systems would brag about the high levels of nutrients in the tea. Not so. I could not find a single site that provided these numbers. Are they embarrassed about how low they are?Some sites say that you can use it straight or dilute it 1:100. That is a huge red flag. A fertilizer that can be effective at full strength and at a 100 dilution rate does not make sense.Since the proponents of bokashi don’t want to report nutrient values we can look at a similar process for some clues. It is not exactly the same thing, but there are several reports analyzing pickle juice. It contains 0.05% calcium, 0.14% potassium and 0.01% magnesium, indicating low levels of nutrients. After diluting it by 100 it is essentially water.Let’s look at it logically. The nutrients come from two sources. The liquid in things like fruit contain some soluble nutrients. These might be extracted with the tea and drain to the bottom of the pail. On the other hand the Effective Microbes need nutrients to grow, so any nutrients present will also be consumed by the EM before they drain to the bottom of the pail. In either case the amount of such nutrients in food scraps is quite low.The majority of nutrients in food scraps is contained in large molecules like protein, DNA, carbohydrates, fats, oils etc. Since bokashi does not break down the food scraps these nutrients are still bound up in large molecules at the end of the bokashi process. That is why an apple still looks like an apple at the end of the process. The nutrients will not get released until the future composting process is completed.It seems fairly obvious to me that the tea is going to have very low levels of nutrients. Until I see some analytical data that contradicts this point of view I must conclude the tea is not much more nutritious to plants than water.Real Benefits of BokashiI am still not sold on Bokashi. The tea has no real value, and the fermented food scraps still need to be disposed of. If you are going to dispose of them in the garden, you might as well compost instead.

In recent years a new way of handling the Bokashi ferment, called Soil Factory, has become popular. I have discussed it in detail in Soil Factory Using Bokashi Ferment. It is a way to process the scraps in the home in a few weeks. You can even use my improved Instant Soil Factory method and eliminate the two week period. Using these methods Bokashi makes sense for apartment owners and others with no garden.

Both bokashi composting and traditional composting provide your garden and plants with the same benefits. Bokashi just seems to be an additional extra step that is not necessary. I would not use it.

That leaves us with one benefit from the list presented above and this one can’t be denied. Saying the word ‘bokashi’ is cool and will impress your friends.